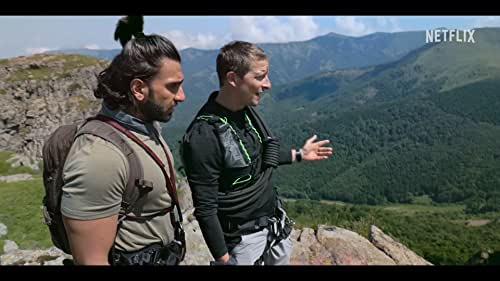 Ranveer Singh is one of biggest disruptors that Indian entertainment industry has ever witnessed. He is called a path-breaker when it comes to choosing the best content and has the knack to pick some of the most challenging roles ever essayed by an actor on celluloid. So, it is not strange that his decision to do a non-fiction show, Ranveer vs Wild with Bear Grylls that dropped yesterday on a global streaming platform, has become a huge talking point and taken a flying start! The show is being hailed for its innovativeness of format and content as well as Ranveer’s dedication to endure crafty challenges designed by Bear himself!

Ranveer is thrilled with the appreciation that Ranveer vs Wild with Bear Grylls has got in just one day! He says, “It’s the disruptive nature of the concept and the format that people have really taken to. Though my intention is never to disrupt or be disruptive, I just happen to make authentic choices and they happen to be disruptive choices; whether it’s in my choice of films, the characters I create. Sometimes when I do certain kind of ads, and now this, in a non-fiction format to do this kind of interactive thing.”

He adds, “I personally thought that was very cool and am really glad how it landed and is being received so well by the audience. Yes, it was an experiment for me and I was unsure about whether it would work on not. To be honest the good folks at Netflix and Banijay were way more confident than me. But when we went out and we shot it and I saw the results, I was like Wow, even I was thoroughly entertained by it.”

Ranveer further says, “I remember, instinctively reacting to it in the room telling the Banijay and Netflix teams that this is there because it’s got all the Navaras. It’s got humour, emotion, thrill, suspense, romance, it’s got so many flavours and to add to that; the audience is participating in the journey. I am really happy that what was an experiment for me has worked so well.”

Ranveer explains his reason to do Ranveer vs Wild with Bear Grylls. He says, “When I was pitched this show I was very excited to do something that has not been done before in the Indian entertainment space. It was something never done before or never seen before and that’s what attracted me to it. In most of my choices, in life, I am inclined towards taking risks. So this was a calculated risk in the sense that I was attempting something that hadn’t been done before; but that was also what was exciting about it.”

About collaborating with Bear Grylls, who is an icon by himself, Ranveer says, “I am an adrenaline junkie. I love when that rush of adrenaline hits me, I get sometimes when I am a doing a certain scene or when I am doing action or when I am shooting movies or am doing a stunt or stuff like that. I like fast cars, I like speed, I like motorcycles, so I am inclined to that. Adventure is a space that I hadn’t really explored, which is why when I was pitched this prospect I was very excited by it.”

He adds, “My first thought was how cool it would be to go off to a forest, something I had never done before. I am very grateful that it was with Bear Grylls who is the king of the jungle. He is the ultimate master of the survival game. There is so much to learn from him. It would not have been the experience, and the show, would have not been anything without Bear.”

Ranveer further says, “He is somebody I made a solid friend in. He is a virtuous man, a grounded person and a warm person. I look upon him as a brother and I share a very warm bond with him. He inspires me and the kind of man he is, the solid family man he is, I really have a great amount of fondness for him.”