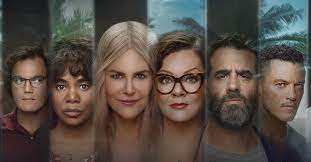 The first six episodes of “Nine Perfect Strangers” were screened for this review.

They’re not all strangers. But Four Unrelated People Plus Two Families doesn’t quite roll off the tongue.

Hulu’s Nine Perfect Strangers, adapted by David E. Kelley and John Henry Butterworth from a Liane Moriarty novel, is the latest adaptation of a popular book into a miniseries. Kelley and Kidman are no stranger to this—most recently doing so with The Undoing last year, and most successfully with Moriarty’s own Big Little Lies in 2017. But Nine Perfect Strangers is the shakiest of the three—there’s enough material here to overwhelm a film, but somehow the series still doesn’t commit a fair division of time to its protagonists, leaving some plot lines more fleshed out than others.

The series follows guests visiting Tranquillum House, a Californian wellness resort that promises a complete transformation of self over a 10-day retreat. Among the guests are the Marconi family: disconnected couple Napoleon (Michael Shannon) and Heather (Asher Keddie), as well as their grown daughter Zoe (Grace Van Patten), all in search of healing after a family tragedy. Another troubled couple, Jessica (Snake Eyes‘ Samara Weaving) and Ben (Melvin Gregg), have come to rediscover the initial spark of their relationship.

The four other strangers have their own problems, too: Melissa McCarthy’s Frances is a successful novelist recovering from a personal crisis, Tony (Bobby Cannavale) is a cynical divorcé, and Regina Hall’s Carmel is insecure and desperately clings to the promises of the retreat. Rounding out the group is Lars (Luke Evans), a skeptic whose constant questioning of Tranquillum House’s methods prompts the rest to wonder why he’s come at all.

Smoothies customized to each guest’s health needs are given out. The guests indulge in massages and nature walks. Then they meet Masha (Nicole Kidman, also a producer), the Russian founder of Tranquillum House. She flits about in loose white clothing, and is equally cold and welcoming. She speaks almost exclusively in vague psychobabble: “When you leave here, you will not be the person you are now,” she tells them. Is Masha really offering a unique, transformative experience? Maybe. Is she hiding something from the guests? Absolutely. Once they’ve been introduced to their host, the real work of transformation begins.

With 11 main characters—Masha and her charges, as well as her right-hand man (The Good Place‘s Manny Jacinto)—it’s difficult to place them all at the center with equal attention. Director Jonathan Levine frames most group scenes in wide shots to accommodate the star power of the group, which leads to the shift toward individual conflicts jarring. Jacinto, Weaving, and Gregg are each compelling but given little screen time. Kidman, the biggest star here, is meant to be elusive but isn’t as central to the material as she should be. Though the guests get the impression that Masha is omniscient, the audience isn’t given that same sensation of unease.

Nine Perfect Strangers is banking on you to come for the cast and stay for the suspense, but the star power is prioritized far more, leaving suspenseful elements and shocking developments to feel half-baked. With a cast as accomplished as this one, it’s unsurprising that the series’ strongest moments are driven by its most intimate scenes. Guests are often paired off, leaving them to vulnerably reveal their histories and reasons for coming to Tranquillum House: the pairing to receive the most screen time is McCarthy and Cannavale (last seen together in Thunder Force) who are particularly electric together.

The tenderness of Nine Perfect Strangers is the strongest part. McCarthy continues her winning streak of dramatic roles, and Shannon, always a welcome presence onscreen, is endearing as a dorky dad struggling to keep his family together. It’s a top-notch cast, and the collective strengths of the actors make the series sing when the rest is flimsy. But the mystery at the heart of it all—what, exactly, is Masha up to?—isn’t always effective, more an afterthought rather than a prevalent riddle. The most jarring parts, from screaming matches among guests to vivid hallucinations, are more mystery-of-the-week than unnerving. The events at Tranquillum House are freaky, but not freaky enough to sever the sense that things will probably work out for the guests in the end.

Nine Perfect Strangers is far from perfect, and not strange in the ways it wants to be. But the trip to Tranquillum House is intriguing, and the guests are fascinating, if you like a little chaos as the summer winds down.