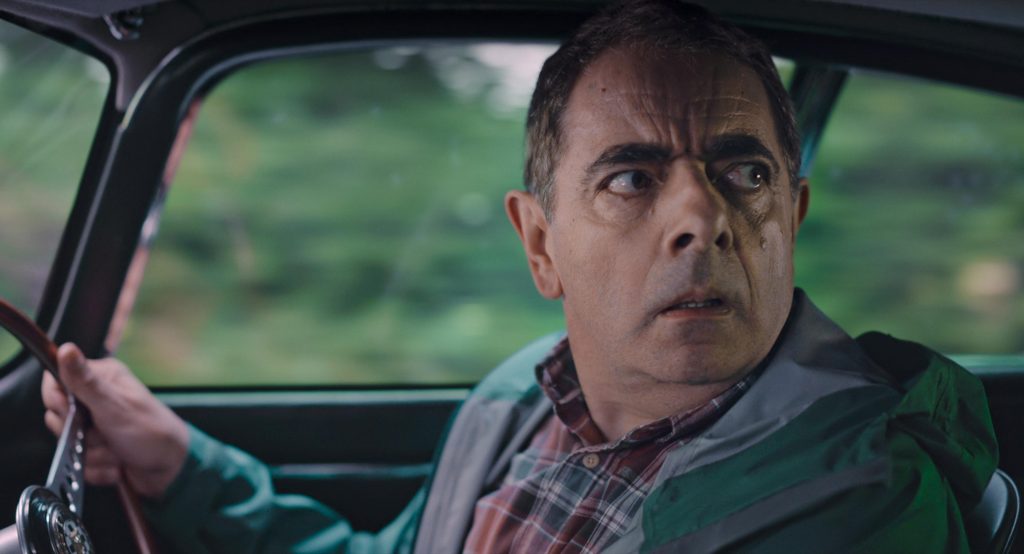 Trevor Bingley (Rowan Atkinson) is a divorced man who’s suffered a streak of bad luck and takes a job housesitting for wealthy couple Nina (Jing Lusi) and Christian (Julian Rhind-Tutt) in the hopes of earning enough money to take his daughter Maddy (India Fowler) on a father/daughter trip. While being walked through the copious modern features and routines of the house he’s sitting, Trevor finds himself annoyed by a bee that drives him to greater and greater lengths at killing it leading to collateral damage to both himself and the property.

Man vs. Bee is the latest project for internationally renowned British comedian Rowan Atkinson who’s best known for his work on hits such as Blackadder, Johnny English, and the enduringly popular Mr. Bean. The series is a reteam of Atkinson with writer William Davies with the two having collaborated on all three installments of the Johnny English series with Johnny English Strikes Again director David Kerr also reteaming with the two. The show is divided into 9 episodes (or chapters) of about 10 minutes each detailing the escalating feud between Atkinson’s Trevor and the CGI Bee who serves as our antagonist. The show’s plot is about as simple as its title and is actually kind of a throwback to 90s comedies such as Gore Verbinski’s Mouse Hunt that pitted Nathan Lane and Lee Evans against an overly intelligent mouse, or most notably the abandoned John Hughes directed Daniel Stern vehicle The Bee which famously was budgeted at $50 million and reportedly only featured 20 lines of spoken dialogue and came a hair’s width within being produced before Stern’s vehicle Bushwhacked bombed leading to the cancellation of The Bee. Man vs. Bee does invite comparisons to other comedies (including Atkinson’s own work as Mr. Bean did an episode segment wherein Bean was pestered by a bee for a cupcake) but with a rapid fire pace and solid timing Man vs. Bee takes it’s premise and delivers a solid vehicle that’s well above much of Atkinson’s more recent output while not quite reaching the heights of Bean or Blackadder.

Atkinson takes a (relatively) more lowkey approach to Trevor in comparison to his other characters as he plays Trevor as an everyman who’s simply driven over the edge by a minor annoyance that’s increasingly exacerbated by a streak of bad luck and heat of the moment decisions. With a plot like this that’s more or less your standard setup for 70% of Looney Tunes cartoons, Man vs. Bee is very much a gag movie that lives and dies on its jokes and for the most part they hit more often than they miss. While the show is technically episodic, the way in which each episode leads into and builds upon the others pretty much makes Man vs. Bee a movie that’s in chapters (in fact a quick re-write and this would probably be acceptable for cinema release). The show as a whole runs maybe about 80 minutes not including credits so it never overstays its welcome. The closest comparison I can think of for something like this would probably be Mouse Hunt which had more resources put into the production design, but Man vs. Bee is more tonally consistent in comparison to Mouse Hunt that often threw a monkey wrench in the comedy by stopping for sentimental moments between Evans and Lane as well as warm reminiscence of their deceased father, so objectively speaking this makes Man vs. Bee the stronger film on the whole.

There’s not a whole lot to Man vs. Bee, but it does deliver what it promises with Atkinson performing pitch perfect visual and physical comedy from a seemingly stupid and inane source leading to massive destruction. At roughly 8 to 9 minutes per episode the show never lets any of the gags have too much opportunity to flounder and thankfully the hits outnumber the misses. If you mare a fan of Atkinson’s work this will give you a welcome nostalgic rush even if it doesn’t quite match the heights of Atkinson’s zenith working with Richard Curtis.