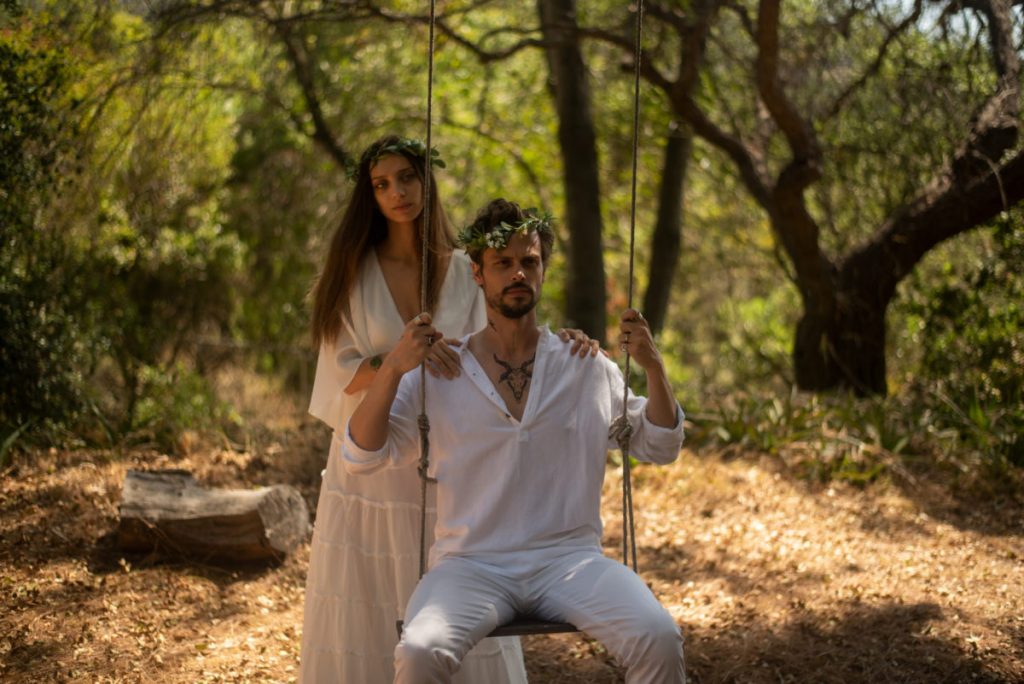 Richard Bates Jr.’s King Knight has an approximation of many things: humor, story, idiosyncrasy, character depth and likeability, production design, dialogue, cinematography, the concepts of witchcraft and self-actualization, and a basic sense of stakes or danger. Its half-formed regard for narrative and form are the haphazard basis of the director’s fifth feature, a superficial take on a hero’s journey that comes off like an unfinished script—an almost-film.

In King Knight, Matthew Gray Gubler (whose visage fits naturally into that of a cult leader) stars as Thorn––the quirky, not-evil, bird bath-selling high priest of a modern-day witches’ coven made up in its entirety of characters played by comedy actors Andy Milonakis, Kate Comer, Nelson Franklin, Johnny Pemberton, and Josh Fadem. Thorn wants to start a family with his life partner Willow (Angela Sarafyan), who’s reluctant to cow to his whims. As their Pagan fertility ritual of Beltane commences, one such couple who makes up the eccentric coven announces they’re embarking on their own fertility journey, further deepening Thorn and Willow’s rift. But when Thorn begins receiving emails about his high school graduating class’s upcoming reunion, a dark secret from Thorn’s past is uncovered: he was once a jock. Not only a jock—also prom king, class president, and his sport of choice was lacrosse. This shocking revelation causes Thorn to lose the respect of his beloved coven, who—much to Willow’s conflicted dismay—unanimously decide to banish him. Thorn leaves as he is told and decides to make the unintentionally hallucinatory trek back to his hometown to prove to himself, to his scorned coven, and to the people from his past who he really is.

If you’ve seen the hilarious, two-part high school reunion episode of It’s Always Sunny in Philadelphia, it’s hard not to note the similarities between that and the markedly unfunny King Knight. A gang of juvenile weirdos––here, one of whom who was once seen as “cool”––joining in on a reunion to try (and ultimately fail) to prove to the entirely disinterested, adult graduating class that they are deserving of respect. Both even conclude with an embarrassing dance sequence. The biggest differences, of course, are that King Knight has no successful sense of humor, nor does it star characters nearly as interesting or engaging as Sunny’s infamous antihero gang. Instead King Knight is proliferated with recognizable faces from both comedy and horror, its cast further filled out by brief appearances from Barbara Crampton, Ray Wise, and the voice of Aubrey Plaza, all of whom deliver dialogue written as if aching to be considered funny in a film that wants very badly to be eclectic. The half-baked jokes, use of comical narration, animated sequences, drug-induced spiritual quest, and the very premise of a witch being scorned for his past jock life all evoke a bygone, Tumblr-level sense of “look-at-me-I’m-so-random” without being particularly inspired or unique in and of itself.

But it all ends up pairing seamlessly with the network-comedy-level production values and egregious shaky cam, at times verging on mockumentary-level camerawork, cinematography here credited to Shaheen Seth. Along with uneven editing (from Brit DeLillo), a weightless script (in which not nearly enough emotional emphasis is put on either Thorn’s attachment to his coven or the weight of his past life), poor attempts at making King Knight into a tried-and-true comedy, and endless barrage of club-music needle drops indistinguishable from the last, it all coalesces into a film that’s only eighty minutes long yet suggests much more. A far cry from Bates’ elegant 2012 bloodbath Excision, King Knight is a mostly insipid, overlong sitcom episode not worth tuning in for.