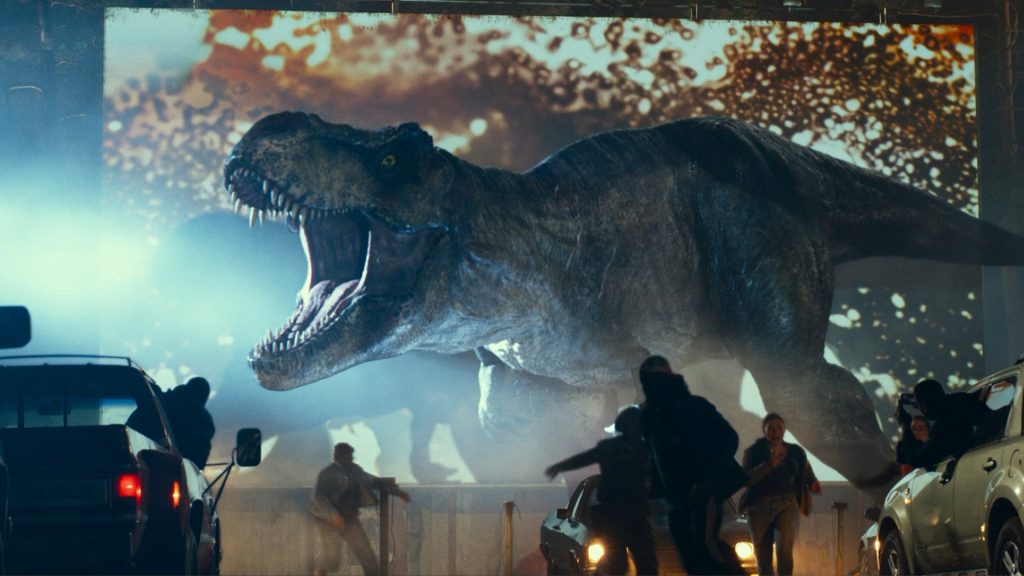 Four years after the destruction of Isla Nublar, dinosaurs now live–and hunt–alongside humans all over the world. This fragile balance will reshape the future and determine, once and for all, whether human beings are to remain the apex predators on a planet they now share with history’s most fearsome creatures in a new Era. Jurassic World: Dominion is a 2022 American science fiction action-adventure film in which the dinosaurs are now on the mainland.

Directed by Colin Trevorrow from a screenplay co-written with Emily Carmichael, based on a story co-written by Derek Connolly and Colin Trevorrow, based on characters created by Michael Crichton. The movie stars Chris Pratt, Jake Johnson, Sam Neill, Laura Dern, Jeff Goldblum, Bryce Dallas Howard, Justice Smith, Daniella Pineda, Omar Sy, Dichen Lachman, Mamoudou Athie, DeWanda Wise and Scott Haze. Life finds a way, although it seems like everything may be on the brink of collapse thanks to free-roaming dinosaurs.

Set four years after the events of 2018’s “Jurassic World: Fallen Kingdom,” the sixth installment in the “Jurassic” franchise shows the perils of wrangling genetically engineered dinosaurs that have since been let loose on the world. As humans live side by side with dinos, the third film in the “Jurassic World” trilogy promises to offer an ultimate solution for how the two species can coexist — for better or for worse. Original “Jurassic Park” director Steven Spielberg serves as an executive producer on “Dominion,” with Colin Trevorrow returning to co-write and direct.

Production on “Dominion” was halted due to the COVID-19 pandemic. Universal Studios revealed that the film spent over $5 million on safety precautions to resume filming in 2020, with an estimated 40,000 COVID tests provided for production.“It has been remarkable,” writer-director Trevorrow told Deadline at the time. “Our crew and our cast has been so resilient. All producers have worked around the clock to make it the best it can be. It has been inspiring.”

“Jurassic Park: Fallen Kingdom” harnessed classic horror film tropes for VX effects to “epitomize an age of anxiety defined by the unexpected threats of the Trump era,” as IndieWire’s Eric Kohn wrote in his review, anticipating the next chapter. “The idealism of ‘Jurassic Park’ today looks mighty quaint; as Dr. Malcolm concludes, we’re getting used to ‘sudden, radical, erratic changes woven into the fabric of existence.’ To that end, the second wind of this franchise caught our culture off guard, but now it has found its groove.”