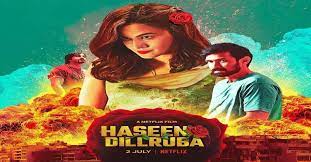 An arranged marriage brings Rani (Taapsee Pannu) and Rishu (Vikrant Massey) into the same room but hardly on the same page. She’s a fan of lurid pulp fiction and a firm believer in sexual adventure. He’s a straight-laced gent without a hair out of place or a crease in his clothes.

Rishu is smitten with Rani at first glance, and refuses to heed his mother’s dire warnings. The saas is right about Rani’s sass, but Rishu, who believes in the slow-steady approach to the finishing line, is confident it will work.

Unfortunately for Rishu and the movie, which claims to be a mystery but devotes far too much time to soap operatics, Rani turns out to be a bride from hell. Incompatibility, infidelity and death tear apart the couple and lands Rani in a police station. There, she has to explain a blast in her home that has left only one remnant: Rishu’s hand with his wife’s name tattooed on it.

Investigating officer Kishore (Aditya Srivastava) is unimpressed by Rani’s moist eyes and tremulous declarations of love for Rishu. Did she do him in by conspiring with her paramour? There are bigger mysteries afoot in Haseen Dillruba, such as the inconsistent tonality, the mistimed black humour, the underdeveloped characters, and the suggestion that for romance to succeed, it must border on a kind of sadomasochism.

The movie has been written by Kanika Dhillon, whose recent screenplays for Manmarziyaan and Judgementall Hai Kya took a stand against gaslighting and championed unhappy women who strayed from convention and unfulfilling relationships. In Haseen Dillruba too, Rani, despite driving her husband to the edge of his sanity, is portrayed as a victim of the chasm between fantasy and reality.

Saddled with an inept spouse, a meddling mother-in-law, and a father-in-law with a receding manner and a strange haircut, this small-town Madame Bovary leaps into the epilated arms of Rishab’s cousin Neel (Harshvardhan Rane). The pleasures of the flesh features in other ways in Haseen Dillruba, leading to a denouement that won’t be a surprise for the keen-eyed viewer.

The screenplay kicks around for far too long before settling into its themes of sexual desire and complicated love. Less interesting than the whodunit is the evolving equation between Rishu and Rani. As a character study of two mismatched individuals who learn to calibrate their responses to each other the hard way, the movie is barely adequate. But at least in the later scenes between Vikrant Massey and Taapsee Pannu, the movie bridges its own gap between expectation and execution.

Most of the actors are constellations in a film that orbits around its volatile leads. Harshvardhan Rane makes little impact, while Aditya Srivastava is wasted as the deeply suspicious police officer. Yamini Das and Daya Shankar Pandey, as Rishu’s parents, lose their relevance once the plot twists overtake the family dynamics.

The beating heart of this misfired amour fou isn’t the woman for whom sympathy is sought to be evoked. Vikrant Massey is riveting as the repressed husband whose thwarted passion takes a dark turn. Massey’s layered exploration of Rishu’s sadness and cruelty easily eclipses his co-star’s efforts. While Rani nearly never repeats an outfit, Taapsee Pannu sticks to a limited set of expressions and actions to convey her character’s turmoil.