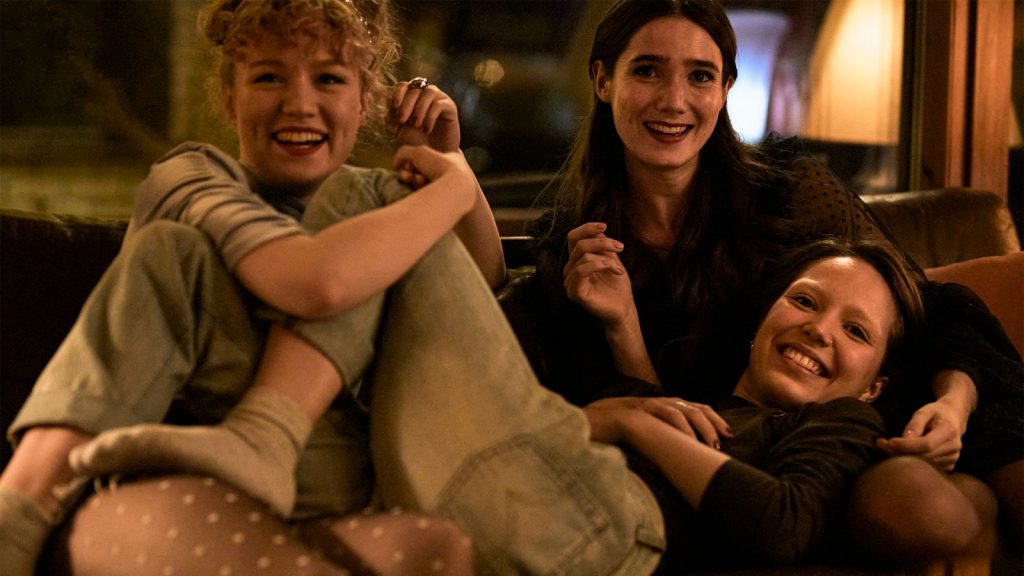 The title of “Girl Picture,” the Finnish director Alli Haapasalo’s winsome coming-of-age film, is straightforward in a deliberate kind of way. It seems to say: Here’s a snapshot of what it’s like to be an adolescent women — nothing more, nothing less. The movie, which premiered in the World Cinema Dramatic Competition at Sundance, sticks to this promise as it unravels a conventional yet enormously likable story of three teenagers in Finland working out their feelings about love and sex.

We meet Mimmi (Aamu Milonoff), a sneering hothead, as she’s picking a fight with a fellow student in gym class. Her surliness is so off-putting that she might be a loner if it weren’t for her longtime best friend, Rönkkö (Eleonoora Kauhanen), whose quirky intellect balances out Mimmi’s quick wit and bad temper. Whether at school or at the smoothie shop in the mall where they work, the pair are nearly inseparable. But while Mimmi could stand to cool off, Rönkkö is looking to heat things up: Despite her attraction to men, she has trouble orgasming with them. “There’s something wrong with me,” she says to Mimmi, who assures her that it just takes time and the right person.

For Mimmi, that right person comes along quickly: After she connects with Emma (Linnea Leino), a competitive figure skater, the pair share a magical night that develops into a fast and furious romance. Unlike Mimmi, Emma is type-A and highly regimented. All her life, skating practice has occupied so much time and mental energy that she’s forgone the fun of adolescence — and Mimmi, nothing if not spontaneous, becomes for Emma the ideal distraction from a life of rigor.

As Haapasalo portrays this evolving relationship, she relies perhaps too heavily on music and montage. Dance floor make-outs, complete with dramatic, blinking lights and pulsating techno, have become a cinematic shorthand for passion, and though the leads here are richly authentic and the camerawork stylish, the club comes to feel like an insufficient bargain of a setting. Forging an intimate bond takes a lot. Can’t we just watch Mimmi and Emma talking, getting to know each other? In relegating the couple’s decisive moments of bliss to shots in a montage, the moments themselves feel devalued — like simulacra of an emotion rather than original expressions of one.

As Rönkkö chases her own pleasure, losses occur more frequently than wins, which at least means that montage is waived in favor of beat-by-beat awkwardness. Rönkkö is impressively persistent in her quest for climax, but even as she troubleshoots the issue with a series of boys, something always gets in the way: rejection, positioning, drunkenness, chafing. In each of these scenarios, you can sense Haapasalo’s control: The movie is admirably candid in its depiction of the confusion inherent to early sexual encounters, as well as the potential for shame. When Mimmi suggests that Rönkkö ask for what she wants in bed, Rönkkö tries out the advice to humiliating results: “Reading out loud a manual for your genitals isn’t exactly a turn-on,” a guy scoffs afterward.

But the relationship that gets the most attentive and delicate touch is the movie’s most important one: the friendship between Rönkkö and Mimmi. Though the duo goes on their respective journeys separately, the movie appropriately aligns their ups and downs, and frequently returns to scenes of them together working at the smoothie shop. Wherever they are emotionally, they’re invariably honest with each other, and even during their lowest moments screenwriters Ilona Ahti and Daniela Hakulinen wisely decline to manufacture a splintering of their relationship. Hurt feelings and blowout fights are inevitable, but 180 turns from attached-at-the-hip to cold-shoulder-disdain (as many other portraits of female friendship, including fellow Sundance premiere “Am I OK?,” are apt to do) never feel entirely realistic. As it does in Mimmi and Rönkkö’s case, a conflict — even a really bad one — is more likely to end in a hug.

Hitting many of the usual coming-of-age beats — pushing people away, mommy issues, and (as has become customary in indie film) vomiting in inopportune situations — “Girl Picture” isn’t a necessarily startling or boundary-pushing work. Yet the lesbian romance at the movie’s center is thoughtfully observed, and the frankness with which each of these characters treats queerness is refreshing. Where another storyteller might be tempted to insert a homophobic parent or a whispering crew of mean girls, Ahti and Hakulinen instead slot in an overbearing ice skating coach whose only sin is high expectations.

If there’s an overarching theme to “Girl Picture,” it’s of young women learning to listen to their hearts and bodies. In spite of the movie’s tropes, Haapasalo clearly understands that, when you’re young, desire can feel confusing or gratifying, thrilling or overwhelming. In her snapshot of contemporary girlhood, Haapasalo contains all of the above — making the movie an affecting achievement that never feels less than loving.