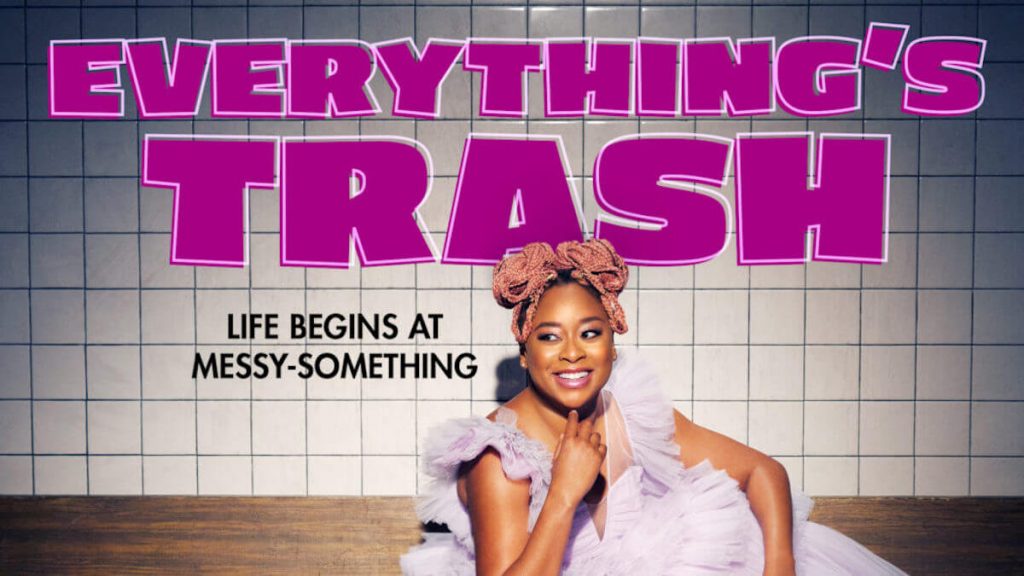 On “Everything’s Trash,” the insecure but brash podcaster Phoebe (Phoebe Robinson) has been invited to speak at a college lecture series; the professor who brought her describes her as “a digital ouroboros” and “a culture-maker extraordinaire.” Understandably, she’s a bit nervous, especially when asked by another, obviously snobbish teacher present what her project is, what she’s trying to say. Phoebe responds this way: “You, professor, are trash. So is that lady, and that dude, and these little meatballs on sticks.” She waves an hors d’oeuvre for emphasis. “All pure hot, and cold, garbage. Actually, everything’s trash.”

Phoebe goes on to say that “diving into the muck” allows us a chance of “surviving the dumpster fire that is our world” — that acknowledging that everything is bad allows us, perhaps, to work toward making it better. It’s a reasonable project, one that could potentially be carried over the line by Phoebe’s (and Robinson’s) charisma, and certainly au courant for an era in which the world seems increasingly miserable. But there’s something sour about this scene that may explain why I was so put off by “Everything’s Trash.” Too often, the show seems to claim that it’s using a relentlessly negative, nihilistic viewpoint to start a conversation, when, in fact, “you’re trash” is a complete sentence.

Robinson, a successful comedian, author, and podcaster (formerly of “2 Dope Queens” with Jessica Williams), plays a far less established media figure: She is witty and ebullient on the podcast she hosts with a friend (Toccarra Cash), but is perennially in debt and feels herself somewhat in the shadow of her older brother. The real Robinson’s brother is a state representative in Ohio, while the fictional Phoebe’s brother, played by Jordan Carlos, is running for office in Brooklyn. The campaign is an engine for drama, as Phoebe is something of an agent of chaos, and attempts to get her to help out tend to backfire. The balance seems at times off in the writing: We don’t get enough of the best of Phoebe, at first, to understand why her brother doesn’t just run his campaign without her, just as we don’t get enough of the real insights Robinson really has to understand why “everything’s trash” is treated as so penetrating by those around her.

“Everything’s Trash” is an entry in a capacious set of recent shows that take wildly different approaches to the question of women growing up in a society that seems unsure of what to do with them. One such show, “Single Drunk Female,” also on Freeform, seemed assured of its tone and characters from the very first. “Everything’s Trash” is less steady, defining Phoebe often through relationships and problems rather than intrinsic qualities, and giving those around her a single note to play. (Her brother is a nerd, while his wife, played by Nneka Okafor, is uptight, and so on down the line.)

Robinson is easy to root for, and her charisma and skill as a performer make scenes work as well as they can. But if “Everything’s Trash” is to have a long run, it needs to find ballast for its nihilism, or at least better evidence for it. The show’s stated position that the world around Phoebe incontrovertibly sucks in every particular reminded me of “Daria,” an MTV series I loved in my youth (and one Phoebe Robinson has spoken about in the past). On that animated series, the title character has a bon mot for everyone she meets — characters whose exaggerated hypocrisy, vanity, or stupidity makes them ripe for a takedown. This show is frank and real about certain unresolvable things in Phoebe’s life: The pain and stress of consumer debt, what sibling rivalry feels like. But when she takes the world head-on, she’s facing a bunch of paper tigers, and it’s not very satisfying to see her crumple them up.