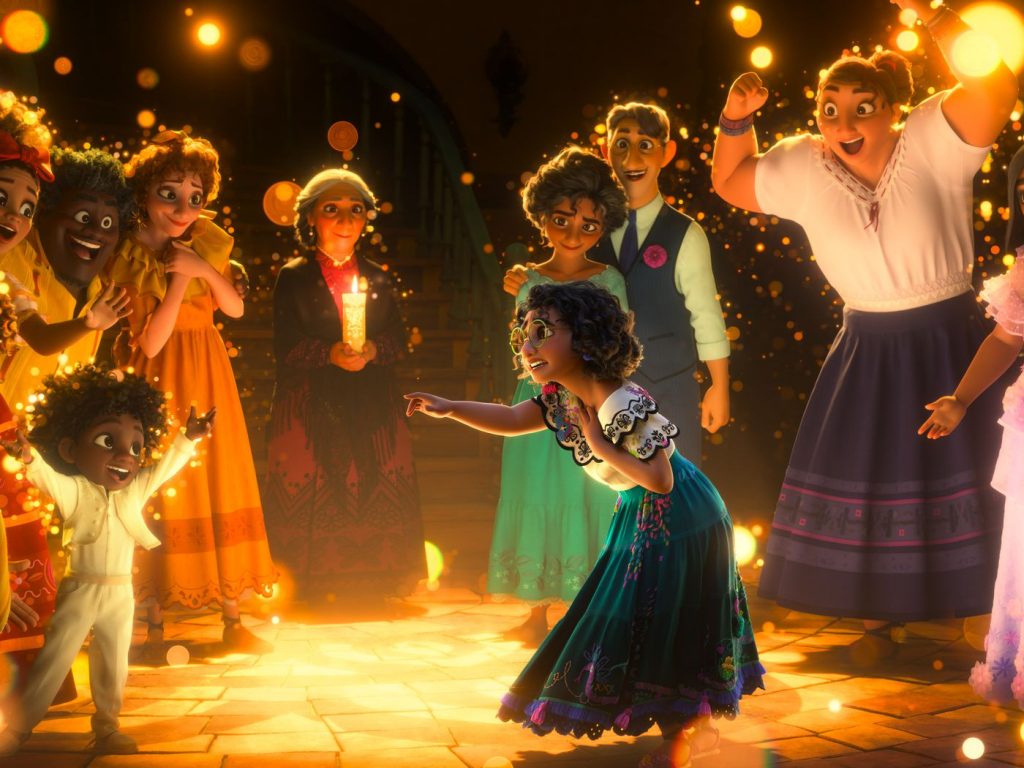 This musical, boasting a lively voice cast and original songs by Lin-Manuel Miranda, has been promoted as the 60th “canonical” film from Walt Disney Animation Studios. But however well-meaning, this milestone movie could almost represent a creative crisis for Disney – it feels like yet another step down the cul-de-sac of bland, algorithmically generated entertainment: more Stepford content from the dream factory. There are some nice moments and sweet show tunes, but Encanto feels like it is aspiring to exactly that sort of bland frictionless perfection that the film itself is solemnly preaching against, with a contrived storyline that wants to have its metaphorical cake and eat it.

Our heroine is Mirabel Madrigal: a smart, introspective, bespectacled teen living with her extended family in a magic house with a mind of its own in an idyllic village in a magically created valley somewhere in Colombia (“encanto” means enchantment or spell). She is voiced by Stephanie Beatriz, who recently had a small role in Miranda’s musical In the Heights but is probably still best known for playing the supercool tough cop Diaz in the TV comedy Brooklyn Nine-Nine.

Mirabel’s grandma is the formidable matriarch Abuela (voiced by María Cecilia Botero), who lost her husband many years ago, and for whom this magical house was mysteriously created at the time, apparently rising up in defiance of this great sadness. And all of her children and grandchildren turn out each to have a magic power, of which Abuela is intensely proud. Mirabel’s mum Julieta (Angie Cepeda) can heal people with her cooking, and I guess only a pedant would ask why she doesn’t heal Mirabel’s eyesight. Mirabel’s sister Isabella (Diane Guerrero) is a perfect Instagram-style princess who can make flowers bloom with her sheer loveliness. Her other sister Luisa (Jessica Darrow) has super-strength and can lift buildings. Her aunt Pepa (Carolina Gaitán) can control the weather and cousin Dolores (Adassa) has super-hearing. This is a pretty heteronormative household but her cousin Camilo (Rhenzy Feliz) can shapeshift because he doesn’t know who he is yet.

But wait. There is one person who doesn’t have a gift and that is poor Mirabel herself. Yet when a sudden, terrible crisis occurs and all the members of the Madrigal family look like losing their powers, it is Mirabel who must step up and save everyone and everything – by tracking down the family’s missing uncle Bruno (John Leguizamo) whose own gift of prophecy allowed him to foresee this awful eventuality and Mirabel’s own part in the fightback. And … well … maybe this family of fanatical overachievers need to see how their supernatural superiority is a neurotic group symptom of unhappiness. Maybe they need humble Mirabel to bring them to a new enlightenment.

So are their gifts a good thing or a bad thing? They didn’t seem like such a bad thing in the film’s opening two acts: these gifts seemed to be part of everyone’s innocent well-being, abilities lightly and modestly worn. And as the rescuing of these powers is the plot motivation, it is an uncomfortable turnaround for these powers to be represented as something to be opposed or surmounted – a paradox which the film does not acknowledge or resolve – especially as we get a pretty broad hint that they may in any case be magically restored. This is a flavourless, unsatisfying film.