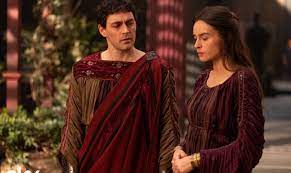 This is an 8 episode series with a strong female lead character being billed as the next Joan of Ark. It quickly dissolves into a routine family drama with bickering and infidelity to try and tease the viewer into caring about characters.

The first 2 episodes do an alright job of developing a good back story and the actors are good enough. The story is straight forward and there is little to no action and anyone looking for gladiators, war or battles will be disappointed.

The 3rd episode starts 15 years after the end of the previous one, and EVERY character has been replaced. This is difficult to follow and doesn’t help the story along much, which is just more family drama. I had to quit midway when a family pet becomes a catalyst for more drama. I watched the rest at 4x speed, and didn’t miss much.

This show caters to a female audience and will lose anyone who is a fan of Spartacus or the Rome series. It just doesn’t compare and resembles the Real housewives of Atlanta type shows instead.