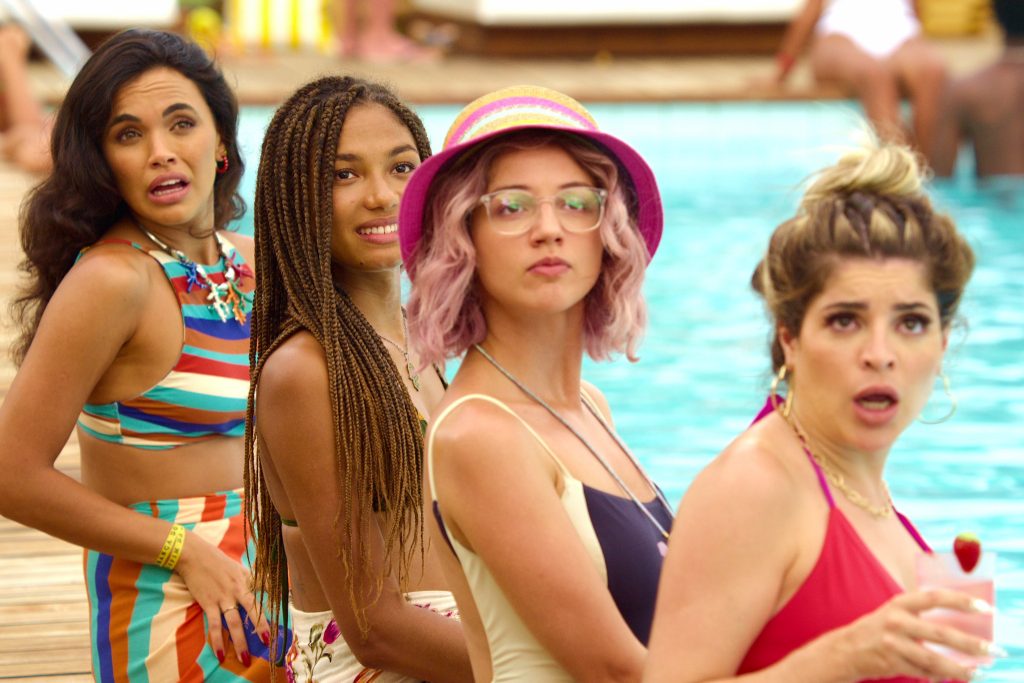 In director Leandro Neri’s “Carnaval,” four young women in Brazil get the free trip of a lifetime, and a few life lessons along the way. After a particularly brutal break-up with her Instagram famous boyfriend, Nina (Giovana Cordeiro), herself a budding influencer, gets the break and swag she’s been posting for: an all-inclusive trip to picture-perfect Salvador, Bahia, just in time for Carnaval, with all its parties and chances to dress up for her followers. She brings along her three friends for the trip: the crowd-shy Mayra (Bruna Inocencio), the nerdy and guarded Vivi (Samya Pascotto), and the loud and flirtatious Michelle (Gessica Kayane). But when they arrive in Bahia, they’re treated to a bad hotel and less privileges than the more famous influencers. Desperate to climb the social media ladder, Nina abandons her friends in order to chase likes and the attention of the charming singer, Freddy Nunes (Micael), who invited them. Eventually, each of the four women learn something about themselves on their holiday, including Nina, who gets a reality check that social media fame is a poor substitute for real friends.

“Carnaval” is like “Girls Trip” by way of Brazil, but the acting and many of the comedy’s punchlines are fairly over-exaggerated. The four leads are just a step above stock characters. Our lead hero, Nina, has most of the narrative dedicated to her journey yet still feels underdeveloped. Her friends are mostly known by their one defining characteristic. Mayra’s actions are almost always ruled by her fear of crowds. Vivi is a nerd caricature escaped from “The Big Bang Theory.” Eight-bit sound effects accompany Vivi’s interactions with a cute geek interested in her, Samir (Rafael Medrado), and her love of robotically quizzing the men she meets with basic geek trivia makes her seem much less grounded in reality than either Nina or Mayra. Then we have Michelle, the loud, boisterous one who makes Samantha in “Sex and the City” seem subtle. She’s a zero-to-sixty hothead and unapologetic flirt, the friend most likely to embarrass Nina’s efforts to make a good impression. But she feels the most cartoonish of the group, like when when she asks her friends to hold her back from fighting a security guard as they’re being escorted out of a fancier hotel they try to sneak into. Maybe it would feel less jarring if all the women were as exaggerated as outliers like Vivi and Michelle, or if those two toned their oversized reactions back down from 11 to match Mayra and Nina’s performances, but ultimately, it creates an uneven dynamic.

Neri, who co-wrote the script with Audemir Leuzinger and Luisa Mascarenhas, saves the movie’s more emotional and thoughtful ideas for the very end, so apologies if this gets a little close to spoilers. One of the film’s biggest developments is Salvador (Jean Pedro), a local tour guide who ends up building a crush on Nina, and shows her his city away from the sponsored Carnaval floats. He makes a point to teach her to enjoy life in the moment, not from behind a cell phone. Although his part in the movie is small, it’s significant and sweet, if a little convenient. Another poignant lesson comes from a character trying to pass as straight, and one of the women being the most understanding and supportive of them after a fight reveals the truth. It’s a hidden twist that tries to address the rampant homophobia towards public figures, a point underscored by the less skillfully written arc for a popular Instagram influencer, Luana (Flavia Pavanelli), who courts controversy and cancellation after drunken offensive remarks. While Nina’s story attempts to explore some of the pratfalls of a life driven by social media engagement, Luana’s story fizzles out into a ham-handed talk about the importance of friends watching your back and teaching you what’s right. It feels like a shortcut back to the movie’s main theme, that friends should be more important than one’s follower count, instead of something meaningful on its own.

Like its bright and colorful imagery, “Carnaval” is more of a lighthearted story about friends taking a vacation and growing closer together. Any social media critique is sparsely interspersed through Nina’s experience, but that’s just not what the movie’s interested in. The focus is mostly on the crew, however cringe-worthy their behavior may be. It’s also interested in the spectacle of Carnaval, with its wild makeup and shiny costumes. Through the lens of cinematographer Marcelo Brasil and Neri’s direction, the movie becomes its most enchanted in these parties and crowds, letting heavily saturated light wash over festival goers and the glitter of characters’ eyeshadow and outfits sparkle on-camera. These moments balance some of the starker scenes of inequality and unease, giving the characters and the audience a chance to escape to a raucous good time among friends. It’s those moments that “Carnaval” truly aims to celebrate.