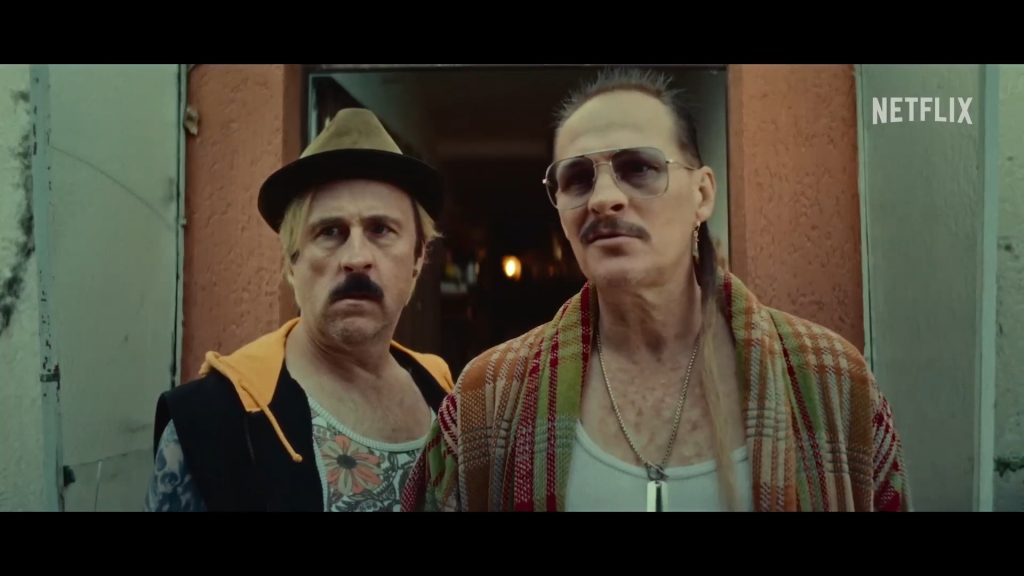 The fast-paced series “How To Sell Drugs Online (Fast)” is one of the most popular Netflix projects from Germany. This is well deserved, as the three seasons convince with humorous dialogues, confidently interspersed youth and pop culture references, as well as a creative, lively staging. Among the many characters, the simple-minded drug dealer Jakob Otto, aka Buba, played by Bjarne Mädel, turned out to be particularly popular. Too bad he accidentally shoots himself at the end of the first season…

But where there is a will, there is a way to tell more about the audience favorite: With “Buba”, the strange scene thief now gets his own prequel in the form of a feature film. A highlight that has a better ending than the life of its title hero. Because with their latest collaboration, Mädel and his director Arne Feldhusen, manage to do justice to the original and at the same time to find a refreshingly personal twist.

Jakob Otto (Bjarne Mädel) was drummed into it from an early age that everything good leads directly to bad. Therefore, he also feels responsible for the accidental death of his parents, which happened at the same time as the greatest moment of success in his life. So that at least his brother Dante (Georg Friedrich) can be successful in life, Jakob makes his own everyday life extremely uncomfortable from now on. This system of self-torture goes well for a long time – until he accidentally meets his old flame Jule (Anita Vulesica). Now he has to choose between potential happiness in love and his brother’s well-being. Meanwhile, he plans to rise from petty crime to organized crime with the help of a supposed Albanian gang…

Whenever a prequel fails, the saying goes: “You know from the start how it will end!” But this explanation falls short. After all, there are numerous powerful stories whose outcome is unmistakably predetermined. However, there is a grain of truth in the standard criticism: many prequels start out with interchangeable characters who only grow into their memorable selves towards the end – boring when you already know what you could have instead! Sebastian Colley and Isaiah Michalski circumvent these problems in their “Buba” script by sketching Jakob from the start as a fascinatingly strange guy who is, however, cranky in a different way than we saw in “How To Sell Drugs Online (Fast )” know.

As the story progresses, events warp his personality traits and habits, leaving him as the haphazard, silty, yet thoroughly menacing criminal nicknamed Buba. This gives Bjarne Mädel (“Stromberg”), who once again plays excellently, the opportunity to bring up new humorous sides in the already established guise: In “Buba” the criminal proves to be extremely self-sacrificing at the beginning, but at the same time incredibly naive, gullible and impressionable. The way Jakob deliberately makes bad decisions with a boyish smile in order to torment himself out of love for his brother is absurdly funny. The inexperienced, naive style in which Mädel lets his character speak also has a grotesquely melancholic effect in combination with his dog look: you want to reach into the screen and shake the not-yet-villain until your superstitions are out of your head solves.

He may convince himself that his torment serves him purpose, but common sense alone tells us that he overdoes it with “modesty is an ornament.” After all, we know how fatal his path will end. The needy rapport between brotherly scapegoat and beneficiary gives this path to perdition additional appeal: Georg Friedrich plays Dante with his typical Viennese humor and basks in the arrogant shimmer of individual, gleefully drawn out words. And the heartlessness with which he sees his brother’s self-torture as his obligation makes him the smug villain you often see in Disney cartoons. Which Dante would probably take as a compliment.

Although Jakob repeatedly emphasizes that he prefers the admonishing, traditional German fairy tales to the happy ending Disney productions, the brothers are quite familiar with the house of the mouse: Jakob dreams of visiting Disneyland in California to see the Yeti Harold , who resides in the old-fashioned Matterhorn Bahn (which he mistakenly calls the cutting-edge Mount Everest roller coaster – he’s not that well-read, after all). Dante, in turn, leads monologues about Walt Disney’s mother Flora, who died of gas poisoning, philosophizes about dead parents in Disney work, and can quote C-class goods like “Bambi 2” off the cuff.

In “Buba” all the characters have their wacky dreams and escapism favorites – transparent fake Albanians, for example, want to become authentic fake Albanians, including a dream wedding. The brothers brought up with “Struwwelpeter” shock pedagogy and Heinrich Müller Protestantism (“Better to cry with Jesus than to laugh with the world. You won’t find Jesus while laughing.”) On the other hand, they have Disney fringe phenomena as Guilty Pleasures and want to become medium-sized criminals .

These characterizations not only lead to wonderfully brittle, casually eccentric dialogues, but are also underlined aptly: Feldhusen retains the playfulness from “How To Sell Drugs Online (Fast)”, but adapts it to the characters. Away with the youthful restlessness and the multimedia frenzy of the internet age. Bring on littered locations where dusty post-war mustiness and accumulated 70s, 80s and 90s knick-knacks collide. Bring on 4:3 flashbacks, gritty footage, dirty edges, and surreal dream sequences that blend vintage western series with the look of bizarre Eastern European cartoons.

Even if everyday life prevails in “Buba”, Feldhusen and the gifted cameraman Yoshi Heimrath (“Berlin Alexanderplatz”) create an illustrative visual language, especially in evening and night-time sequences: The events are not exactly rich in color variety, but there are a few striking contrasting spaces regularly break into the same sight, just as Jakob senses a light at the end of the tunnel of his monotonous, oppressed life. He has no idea that what he sees as a glimmer of hope are ultimately just the headlights of a symbolic truck rolling towards him.

What better way to counter the prequel’s counter-argument of predictability than with a story that itself ponders the allure of happy and tragic endings? The film opens with Buba’s inglorious end, followed by a long flashback. How the doomed man repeatedly raves about stories in which the main character dies in the narrative commentary and in the dialogues is full of bitter irony, which is consistently savored. Buba’s gradually increasing tolerance for Disney’s fairy tale storytelling takes a pointed, cynical twist:

He may later see himself as the hero of his own story and gradually realize that he deserves happiness. But his path of illegal self-determination makes him an adversary to the morally unsteady “How To Sell Drugs Online (Fast)” heroes. Buba has to die for her story to have a happy ending. So what is “Buba”? A draconian, old German fairy tale without a happy ending? After all, the long-suffering title hero dies in a stupid accident. Or a Disneyfied fairy tale in which good prevails? Eventually, the bad man gets himself out of business (sparing the good guys the moral dilemma of killing in self-defense). Probably just both.