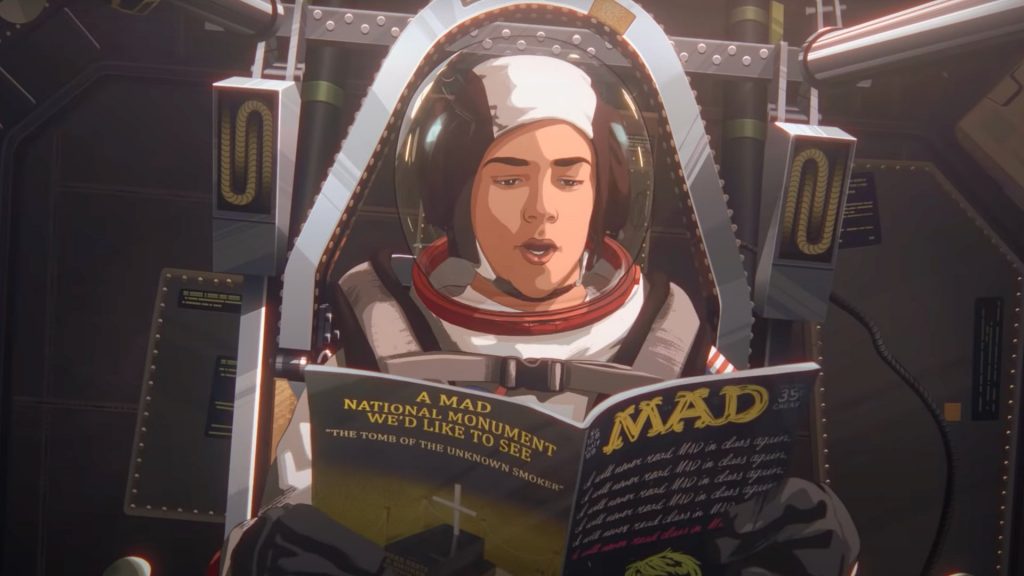 Adult Stan narrates (in the voice of Jack Black). And there he is as a kid (Milo Coy), who I’d estimate is about nine years old, because that’s how old Linklater would’ve been in spring, 1969. Stan’s the youngest of six kids. Nuclear family. In a fresh Houston suburb that’s still growing but hasn’t expanded all the way down into that big field yet, where Stan and many other kids go to play. His dad works just down the road at NASA. Much to Stan’s chagrin, his dad is not an astronaut or engineer; he’s just in charge of shipping and receiving. Maybe he has something to do with transporting a rocket from Texas all the way to Cape Canaveral. “If that doesn’t have to do with shipping and receiving, I don’t know what does,” Stan’s dad boasts.

We quickly learn that Stan’s like his old man: full of shit. Stan shares wild made-up stories during show and tell. He makes up bawdy song lyrics during choir and beans kids during gym-class kickball, and regularly gets paddled – literally on his ass because that’s the way it was back then – by the principal for dredging up trouble. And yet, one day, two officials from NASA pull him out of class and tell him he’s going to the moon. Secret mission. They screwed up and made the lunar module too small. Someone his size has to test it. By going to the Moon. The actual capital-M Moon. And he’s it. He’s the one. He’s an astronaut now. Apollo 10½. But he can’t tell anyone. Not even his parents. They’ll say he’s going to summer camp in Michigan but actually he’ll be 238,900 miles away on the Moon. Get ready, kid.

Stan’s projectile vomiting on the cyclotron when he voiceover-halts the tale – looks like he had eaten some colorful M&Ms or Jujubes that day – to tell us all the cool things he knows about Houston and being a kid in 1969. The Astrodome. Astroturf. Brand-new pushbutton phones. The bowling alley and arcade. The neighbor kids whose mother gave them rubber bands to chew on. Canned ham. Creamed corn. His Depression-era grandparents reusing paper towels. His other Grandma’s JFK conspiracy theories. Pollution. Littering. Vietnam. The Cold War. His dad drinking beer while driving the family station wagon because it was legal. His mom’s omnipresent cigarette – indoors, in the car, everywhere. The “height of the prank-call era.” The Age of Aquarius. Baskin-Robbins’ 31 flavors. Ouija boards. Little league baseball. Shooting each other with roman candles. His sisters’ hairstyles. Pouring spoonful after spoonful of sugar on top of cereal. Saturday morning cartoons. Going to see 2001: A Space Odyssey and watching all the sci-fi space movies and TV shows because everyone was crazy for space at the time. Like forgotten TV series he loved, The Time Tunnel and It’s About Time. It’s about time. Time. This movie – it’s about time.

Funny how a layer of artificiality atop traditionally shot footage renders Apollo 10½ far more detailed and evocative than a collection of actors in retro-wear working on a facsimile 1969 movie set. Linklater pieces together his own footage with home movies and famous, ubiquitous archival films, creating a vibrant, funny and astonishingly alive collection of memories rippling with wonder and authenticity. Key word being “memories” – Linklater tangles together young Stan’s singular contextual details with his fantasies like a master storyteller whose narrative only gets wilder, and deeper in horse puckey, as the years pass, inevitably.

There’s a line of dialogue from the movie’s final scene that puts a sloppy bow atop a messy recollection: “You know how memory works,” Stan’s mother says. “Even if he was asleep, he’ll someday think he saw it all.” Translation: Don’t trust any of it. The movie’s winking at us. But I’m here to insist that you should trust it, fully, as a generational point-of-view. The board games, the station-wagon rumble seat, the CHUNK sound of the channel knob turning on a console television, the far-beyond-the-sky’s-the-limit feeling of opportunity – those things invoke a time and place that was concrete, real. And long gone.

Apollo 10½ is very much a piece of Linklater’s greater oeuvre: Dazed and Confused chronicled a day in the ’70s, Everybody Wants Some!!!, a weekend in the ’80s. The Before trilogy dropped in on a couple every nine years to spend 24 hours with them. Boyhood real-times a dozen years in a kid’s life; it’s the ultimate coming-of-age film. This new film is about an American summer – suburban, halcyon, thoroughly caucasian – when it felt like hope and opportunity underscored every playful flourish of a kid’s life. It’s cut with comedy and a sly, sneaky sense of wisdom, and feels deeply personal for the filmmaker. Like his many wonderful films, Linklater doesn’t seem to be intentionally crafting any kind of grand overture, but it kind of becomes one anyway.