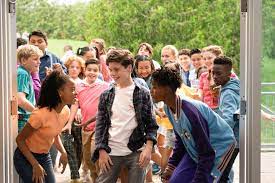 Evan Goldman (Eli Golden) is a 12 year old Jewish boy in New York City preparing for his bar mitzvah when his life is torn asunder by his parents Jessica (Debra Messing) and Joel (Peter Hermann) divorcing following Joel’s affair. Jessica and Evan move to Walkerton, Indiana to live with Jessica’s mother and Evan’s grandmother Ruth Weiss (Rhea Perlman) which means that Evan will leave behind his friends and life and be forced to have his bar mitzvah in a new town. Evan befriends next door neighbor Patrice (Gabriella Uhl) over the Summer, but once they start school in September Evan is determined to get the cool kids to come to his party which puts strain on his relationships.

13 is an adaptation of the 2007 musical of the same name with music and lyrics by Jason Robert Brown and book by Dan Elish and Robert Horn. Attempts had been made as far back as 2014 when the now defunct CBS Films acquired the rights only for nothing to be done with them before the company folded in 2019. Following the reversion of the rights to the original creators, Netflix along with producer Neil Meron best known for the adaptations of Hairspray and Chicago acquired the rights and Tamra Davis hired to direct and Robert Horn. Now having been released 13 is competently made and easy enough viewing, but it’s also not all that substantive and I think despite its title the film will probably appeal best to those whose ages are a few digits below 13.

I’ll preface this by saying I know next to nothing about the original stage show as I’ve not seen it so I can’t speak to how successful the film is at recreating the experience audiences got from the stage production aside from Robert Horn having credit on both the stage work and the film. When I was watching 13 it felt very much like the same level you’d expect from something like High School Musical or other similar Disney Channel musical fare and much to my surprise came to find Horn does indeed have a number of credits on such productions one of which is a spin-off from High School Musical and director Tamara Davis also directed three episodes of the Disney+ TV series High School Musical The Series. There’s really nothing 13 The Musical does all that wrong exactly, but if you’re familiar with the petty drama seen in stuff like Saved by the Bell or High School Musical where tween to teen problems are presented in over the top fashion but with a softer edge you’re pretty much going to see all of that on display here only the linking element of Evan’s forthcoming bar mitzvah used as a centerpiece around which the story is constructed. In terms of the actors most of them are perfectly fine with Reha Perlman probably my favorite as I’ve always been a fan of her comedic delivery and it’s still very much on point here. Most of the young cast are relative newcomers with the exception of JD McCrary who was previously heard as the voice of young Simba in the 2019 Lion King Remake and they’re perfectly serviceable if understandably a little green given for many of them this is their first feature production. The two standouts were probably Ramon Reed as Eddie and Jonathan Lengel as Archie who despite being supporting players did give me some of the funnier moments of the movie and did show a natural screen presence and energy to their roles so it’s possible they may be ones to watch out for.

To say “this movie wasn’t made for me” is an understatement. While the movie will be perfectly serviceable to the same tween demographic who indulge in various Disney channel films or other inoffensive musical fluff, there’s not much here that will compel those whose ages are the title or above with the best hope being tolerance as it plays in the background to possibly mild annoyance. I understand I’m not the target audience for this movie, but I do have to be honest about my thoughts and I really didn’t enjoy this.

Who Are You People 2023 Movie Review